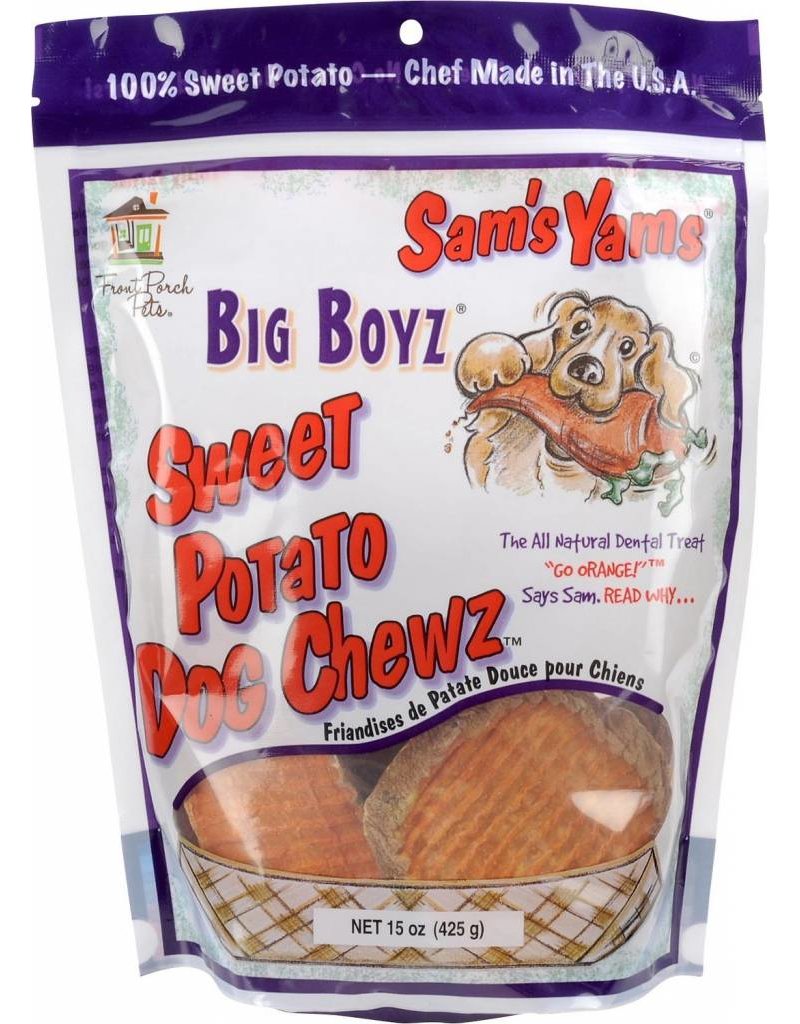 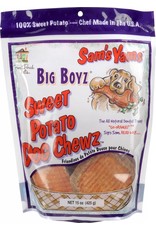 An excellent chew for all dog sizes. Made of whole thick slabs of sweet potato, dehydrated. The chews have a hard surface, excellent for dental health, and a chewability that dogs love. Smaller breeds will chew these for fifteen to twenty-five minutes. Medium to larger sized dogs will chew them faster.

100% Sweet Potato: Referring to them as “nutritional superstars”, The Center for Science in the Public Interest deems sweet potato number one in their ranking of “10 Best Foods”. Unlike white potatoes, sweet potatoes are roots, not tubers.

Offer daily as a healthy treat to promote clean teeth and gums. Always make sure your dog has access to fresh clean water. Monitor your dog while chewing.

Is sweet potato healthy for my dog?

Yes, very healthy. These chews are especially good for dogs with food allergies or other dietary problems such as obesity or diabetes. Sweet potato is very high in a wide spectrum of nutrients. See The #1 ranked Vegetable. Senior dogs will benefit from having something to chew that is not hard on sensitive teeth. Puppies benefit from the high levels of calcium and other nutrients. All dogs benefit from the fiber in sweet potato, which is helpful for digestion and helps to improve their stool.

In their own words... Front Porch Pets began in 2004 as an umbrella company for the production of Sam’s Yams Sweet Potato Dog Chews.  We knew even then that the potential for our approach to the pet treat market would eventually go beyond Sam’s Yams and include a wide variety of fruits and vegetables used in making healthful treat and foods, not only for dogs, but cats, horses, birds, small critters and even farm animals.

The founder, David Baldus, aka Chef David, started all of this in farmers markets in Southeast Wisconsin in the summer of 2003. Leaving behind the position of Director and corporate chef working in the product development division of a large multi- unit restaurant concept.

He stumbled upon the idea of using a sliced slab of sweet potato, dried to just the perfect level, to mimic the chewability of rawhide. Including a rigid grooved surface provided even greater cleaning action for dog’s teeth and gums. Sam’s Yams hit upon a growing need for providing dogs a healthy chew that was not made of gluten, plastic, bone or rawhide.  A patent was finally granted Chef David a few years later.

Though it may seem as somewhat of a lark to create such an outside- the -nine- dot product for the pet industry, in all truthfulness Chef David has spent decades creating recipes and menus within the food industry and has been making snacks and food for his dogs and the many dogs and cats he has rescued.

A stint as the owner of a rural bakery in the Zuni Mountains of New Mexico left a big impression as well. David built a six foot (inner dimension) stone oven, or horno, with the help of some local Zuni folks. Here he created hand milled and long fermented breads and pastries complete with wild gather yeast, wild sage, oregano and pinion. This was back in the 90’s when artisanal still meant something, artisanal!

It was here that David and his girlfriend also began a dog and cat rescue. There were times when someone moving out of the area would ask if we wanted another dog, which we could never turn down. Some were rescued as puppies or adults from the very out-of-the way local dump. Some rescues were found just wandering far from any possible home or ranch seemingly dropped off in the middle of nowhere.

With hosts of animals to feed on our little ranch, fifty-five miles from any grocery store, it took much perseverance and creativity in feeding them all affordably. When it came right down to it, they ate mostly what we ate all as a big pack. A happy bunch at that.

From the start, Sam’s Yams Sweet Potato Dog Chews were produced on a shoestring budget. David and his lovely mate, Faustina, moved out of their five- bedroom home and into a forty foot tour bus jaunting about to various sweet potato growing areas in California. Our early main production facility was in a renovated mushroom farm where we sliced, dehydrated, sorted, packaged and shipped around the country. About this time, bARK Magazine did an article on our little company that catapulted Front Porch Pets into the national limelight.  Our friend, Brian, quickly and brilliantly whipped together our first website to handle all the new inquiries. Faustina and David did much of the process of addressing the shipments from around a campfire at night and then shipping out packages from Kinko’s in the morning. Soon, it became a family affair where David’s daughter Ashley, set up another shipping center in her garage for West coast customers. His two sisters, Jan and Beth and two cousins, Susie and Chris, jumped in to take the calls and ship out orders for the Midwest and East coast. Finally, we decided to centralize our entire operation in our home state of Wisconsin where we are today, in the rural mid- state village of Wild Rose and still a family and friend operation.

Add your review
0 stars based on 0 reviews